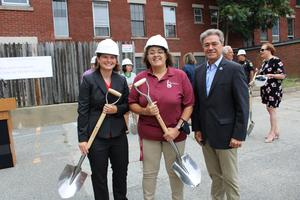 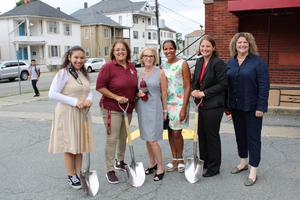 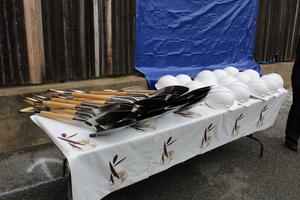 The Global Learning Charter Public School (GLCPS) recently broke ground on a major renovation and expansion project to create a state-of-the-art educational facility in the north end of New Bedford.

“Today, we have reached a milestone as we begin the transformation of the building behind me,'' said the school’s executive director, Stephen Furtado. “This addition to our current building will include new science classrooms and labs, a technology maker space, an expanded College and Career Center, world languages, mathematics, music and art rooms.”

Approximately 100 people attended the event, including several elected officials, community leaders, and members of the GLCPS Board of Trustees as well as representatives from the architectural firm Arrowstreet and the project management company, Construction Monitoring Services, Inc. Also attending the event were GLCPS staff, students, families and neighbors.


During the groundbreaking ceremony, Dr.Furtado announced a donation of two million dollars from New Bedford native and founder of Qualcomm, Irwin Jacobs and his wife, Joan Jacobs to help finance the renovation.


“Their commitment to the project sends a message to the city, the students and the staff of their strong and steady support for charter education,” said Furtado.


GLCPS Student Ambassadors were on hand to unveil a banner proclaiming the building as the future Joan and Irwin Jacobs Center for STEAM (Science, Technology, Engineering, Art and Mathematics) Education.


Dr. Furtado also recognized several other donors, including BayCoast Bank, Bristol County Savings Bank, the Acushnet Foundation Fund, the Mifflin Memorial Fund, and the GLCPS Board of Trustees. The school continues to seek additional funding for the project.


State representative Antonio ‘Tony’ Cabral congratulated GLCPS on its plans to renovate an existing building in the neighborhood where the school is located. “I am a big supporter of public schools and that is one of the reasons why I’m here,” said Representative Cabral. “Today, is about students in this city and families in this city. Charter schools, in their mission, are a place of innovation, a place that allows flexibility in order to create new outcomes and, hopefully, those new outcomes can be utilized in New Bedford public schools.”


Work will begin shortly to renovate the structure which was formerly a convent and is adjacent to the current school building located at 190 Ashley Blvd. The renovation and expansion will create state-of-the-art educational space for students, establish opportunities for community groups to use the new facility, and provide a much-needed improvement to the neighborhood.


Speaking on behalf of the city of New Bedford, City Councillor Ian Abreu noted the significance of rehabilitating an existing building in a deserving neighborhood. “What Dr. Furtado, the Board of Trustees, his committee and donors have decided is that you’re going to rehabilitate a blighted structure to bring up and bring back this neighborhood which is truly one of the gems of this city, the lower north end. It’s about time we invest in the lower north end of New Bedford,” said Abreu.


School officials estimate the cost of the project to be $8.5 million. Roughly $7.5 million has already been raised through grants, the school’s surplus account, and private and public donations.


Tim Nicolette, executive director of the Massachusetts Charter Public School Association, congratulated GLCPS on being a leader in education innovation for the city of New Bedford.


“We’re excited for the long-term commitment that this represents to the city of New Bedford. It is an investment in students and in families to really help continue the next generation of innovation. It’s about both the building and what’s happening inside those walls.”


In order to allow the project to move forward, GLCPS has entered into a 25 year lease agreement with the diocese of Fall River. Renovations are expected to be completed in time to open for the 2022-2023 school year.


GLCPS high school sophomore Natalie Teixeira also spoke at the groundbreaking, noting that the new facility’s maker space will help her realize her dreams of building pride for people of color.


“This … will help my dream of being a main part of an animation team,” she said. I wish to make a cartoon that will give people and children of color a better view of characters who look, act and eat the same foods as we do. To tell them that we are valid.”